I wanted to understand assets in Statamic for good, so I decided to document everything I've ever done with them. The support team doesn't understand me very well; I think it's because I'm not using the right YAML terms. I wrote this document to learn and to help explain things to other people who might think in terms that I use, rather than in the terms that official documentation uses.

I'm now satisfied with my understand of assets, but I still can't figure out how to use image assets in bard fields. Earlier today, someone else was asking about images in bard fields on the Slack channel, and I folded that conversation into my investigation here.

First, let's point out where in the structure of a Statamic project are the files that affect the rendering of UI controls and the referencing of fields from within templates.

Places where fieldtype stuff comes from

Confusion 1: What is the asset "type"?

For most kinds of UI content controls, specifying type: in the fieldset file is all that is required to get the desired UI control on the back end.

This correctly creates a toggle switch.

This correctly creates a text field, where a simple text string is inserted through my template.

Assets actually do follow this pattern, even though there is some additional complexity. The correct way to specify an asset from within fieldset YAML is type: assets. Importantly, "type: asset" does not work---it throws a "FatalException" PHP error.

Using the array looping syntax for specifying an image out of an asset group -- combined with a fieldtype in the fieldset file specified by the page's markdown file -- this Antlers code outputs my image both on the webpage and in a little preview in the control panel:

When using the control panel to upload images and edit their meta information, the two UI fields for "Title" and "Alt Text" write into title and alt write into the YAML file for the asset group. 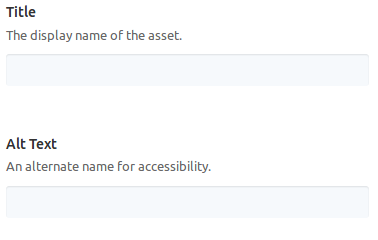 I have never seen this data successfully pre-populated into the UI from properly configuring the text files beforehand, because I've always been confused about the asset groups and where the data is coming from.

The bottom two images with blurred text are listed in this file because I uploaded them through the Asset Browser.

Confusion 2: What is an asset "Container"?

A major source of confusion is that asset data can be referenced from two places -- fieldtypes or Containers. It's still unclear to me what piece of YAML is affecting a Container, and whether the code that affects the appearance of the control panel back end is from the asset's container or the fieldset's YAML.

The documentation for asset template tags points out this dichotomy. Above, I've describe Statamic's built in organization features for assets ambiguously as "groups," because I've been confused about how an asset Container is specified in YAML.

The main documentation article about assets explains what an asset is:

Each Asset Container and its configuration is represented by a YAML file inside site/content/assets. The name of that file (e.g. main.yaml) the container ID (main).

Note that second sentence. The filename is the container ID. I wonder if this is the same ID that the asset tag documentation means when it says,

Your site's Assets are managed and stored independently of your pages and entries and have a joined relationship through their id.

That might be important; at any rate, this control panel alert is common:

In a different project, I avoided having that notice appear on the control panel above the successfully populated image preview with this:

In that project, section_image references this from the asset container YAML:

This main.yaml file continues with all the rest of the default image assets from the Redwood theme, much like in the screenshot of my text editor showing a different main.yaml.

So, the thing that I named section_image is on the same YAML level as the assets name space thing. (My lack of familiarity with YAML terminology is a significant part of my confusion over all of this.)

Terminology aside, using the control panel to upload an image places it inside the assets namespace in the default container's YAML file. So, following this observation, shouldn't the correct tag for referencing an image listed under assets be {{asset:assets}}?

But promoting the identifiers for those two images in my other project to the same level as "assets" in their main.yaml doesn't get rid of the notice. It also doesn't get rid of the images, either on the webpage or previewed in the control panel -- even when I've commented out or deleted the original inclusion of these images beneath "assets".

(For a few minutes, I was thinking that moving the identifier in main.yaml removed the preview from one of the two images. However, actually the reason that the preview wasn't appearing was that I had only set type: assets for the first image in the page's fieldset file. When the assets fieldset type is not specified, the image can still come through on the webpage, but the control panel will only show a text field with the image path.)

I did create a second asset container once. I think I used the command for the php CLI interface in order to set it up initially, but I can't remember.

I named the container "static" (not really a great choice when the system you're using has a similar name), and my static.yaml file looks like this:

This was the use case the generated the successful asset browser control.

Does it matter that I used the identifier "assets:" in my static.yaml? I tried changing "assets" to "downloads" and it still seems to work.

Confusion 3: "image" is not a fieldtype type

This is how following the examples on the Replicator and Bard documentation could be confusing. The documentation for these pages shows type: image inside a bard_field namespace. However, putting "type: image" inside a fieldset file produces the PHP FatalException error.

A bard field is declared in the fieldset file:

And used in the template with the same namespace ("freeform" being my example here):

The control panel recognizes the text part of the bard field, but all we get for the image part is an empty draggy rectangle thing.

Here there are three sources of confusion:

Let's get rid of the ambiguity by changing the identifiers. Now our template looks like this:

This change has no effect on the control panel or the webpage. Trying to bring in the asset controls for the image on the bard field in the control panel, I looped through this willywonka image array (of only the one image) in the template:

That's accompanied by an expansion of the freeform block in the fieldset file:

The last thing I tried was to make this willywonka identifier the equal of freeform on the hierarchy of the fieldset file, directly inside fields:. Still, there is no effect. I still don't how to properly use images within Bard fields.

If you can offer any more clarity about anything I (and potential other users) may still be confused on, please do jump in. Thanks!